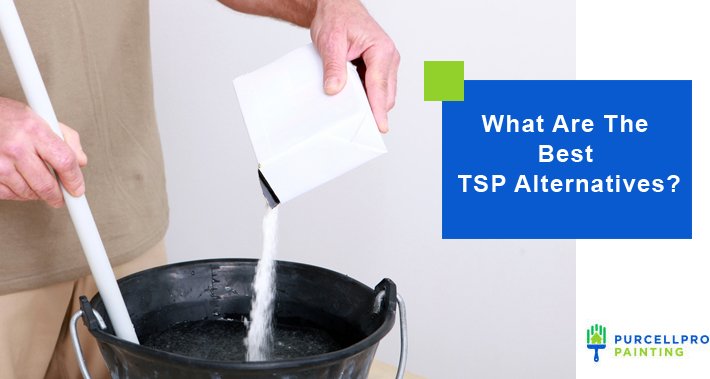 For a long time, the go to cleaning product for preparing surfaces for exterior painters was TSP.

TSP was cheap, easy to use, and does a great job.

The problem is, Pennsylvania banned its use.

We’re PurcellPro Painting, a professional Willow Grove PA painting company, and we used to use TSP quite a bit.

But now, we work with the alternatives.

It’s a packaged cleaning product made of three quarters trisodium phosphate and the rest sodium carbonate, a compound similar to baking soda.

You’d buy a box of it, and dissolve it in a bucket of hot water.

That gives you a slightly cloudy solution that was just about perfect for cleaning walls.

In particular, it’s great at cleaning away soot, grease, and other stubborn grime.

Because you mix the solution yourself, it’s easy to mix it stronger or weaker as needed.

It also has a very long shelf life, so long as you keep it dry.

However, there are some major drawbacks.

The Problem With TSP

There are a few drawbacks to TSP that are relatively minor.

It’s a skin irritant, so you need to wear protective gloves when using it.

It can also damage glass and aluminum surfaces, so you need to watch for that.

But that’s not so big a deal.

Not enough to warrant banning it, anyway.

But TSP use has been banned in 16 different states, including Pennsylvania.

The problem is with the P part of the name – phosphate.

Phosphates are commonly used in cleaners because they’re very effective in dissolving grime.

They’re also a common ingredient in fertilizers, making them highly valuable in agriculture.

However, phosphate is also considered particularly delicious for algae.

When phosphates from cleaning products like TSP end up in the water supply, they can lead to algae growing faster than the environment can handle.

This leads to massive death of fish and other aquatic life.

It can harm humans as well, since some algae can produce toxins.

It can get into the air as well, making it hard to see, harming plants, and even making it difficult to breathe in extreme cases.

For this reason, phosphate detergents have been banned, and that includes TSP.

So if you want to clean your surfaces, what are the alternatives to TSP?

Fortunately, there have been alternatives on the market for many years which are quite effective.

Let’s take a look at some of them.

Phosphate Free TSP seems like a bizarre name, once you know what TSP actually stands for.

But I guess it makes sense with what they were going for.

Phosphate Free TSP uses a substance called sodium sesquicarbonate as the active ingredient, rather than the phosphates.

It’s not quite as effective at cutting grease, but it’ll do in a pinch.

Simple Green is a liquid based cleaning product.

It cleans and cuts grease very well, but one of the nicest things about it is that it’s not an irritant like TSP is.

So you can leave your gloves and masks in the cupboard.

There are a number of different blends of Simple Green depending on what your needs are, making it highly adaptable too.

So what’s the downside?

First of all, it’s more expensive than TSP.

It also tends to take more time to clean away, since it becomes more bubbly than TSP does. 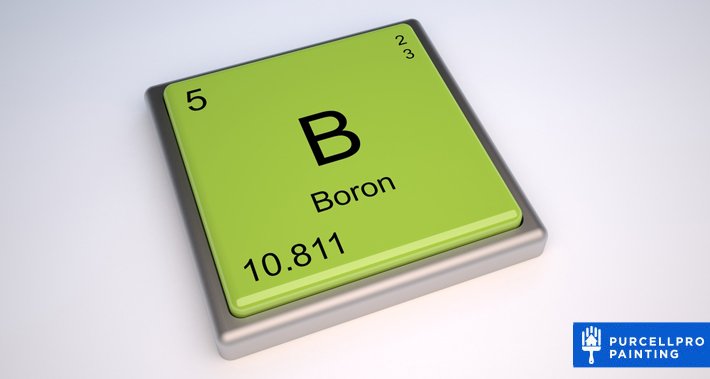 You know that old box of borax sitting on your garage shelf?

The one that’s been there longer than you have, but that the previous owner insisted would come in handy?

The one that you’ve been staring at for years, wondering whether you’d ever find a use for it?

Borax is a boron-based mineral that has a wide variety of different uses, including as a water softening agent, a food preservative, and as a cleaning product.

Instead of mixing TSP into your bucket, mix some borax in, and you’ll have an effective cleaning solution.

Not sure which cleaning solution to use?

Do you struggle with change, and find yourself annoyed that you can’t just use your trusty old TSP the way you used to?

We were frustrated when the ban first came down too.

The good news though, is that there are plenty of options for cleaning surfaces before you paint that haven’t been banned.

Even better, these options aren’t as harmful to the environment as TSP is.

If you have a residential painting or commercial painting job you’d like to get taken care of, call PurcellPro Painters today for a free estimate.

Got a painting project in mind? Give us Call

We’ll arrange for a free on site estimate for any interior or exterior painting needs you have.


At Purcellpro Painting Inc we pride ourselves on top quality painters and painting solutions for residential and commercial customers in Montgomery and Bucks counties, Pennsylvania. 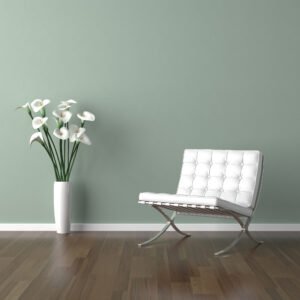 Contact us today to get a free on site estimate for your painting project from Pennsylvania’s trusted painters.

Get in touch
Purcellpro Painting Inc
5.0
Based on 6 reviews
See all reviewsWrite a review
He is able to give me a quote in a few hours, and get to start the job the very next day! Purcellpro Painting guys do a great job in following up and make sure things done... correctly! They give an honest opinion. Good communication. I will sure use them again in the future! Highly Recommended!read more

Elias J.
I’d just like to say that Purcellpro power washed then painted the exterior stucco on my home. And done a Excellent job and I’m very happy with the work they done thanks purcellpro

Tom L.
Purcellpro Painting and his crew painted the exterior of our house. They did an amazing job and the price has been affordable. The painters arrived every morning at the same time,... we are very happy and satisfied with them. We definitely use them again. We highly recommended them for any painting job.read more

edna E.
Frank was quick to respond to our initial call. Within two days the job was completed. The work was neatly done and so was the clean up. The porch looks great and we would be... happy to recommend him.read more

Rudy U.
Purcellpro Painting is the best! They are honest, reliable and very reasonably priced. I have used them several times for everything from painting to complete remodeling and would... only use them should I need work done in the future. Highly recommend this Company!read more

jerry G.
Francis did amazing work in my family’s home! Painted my parents bedroom and our foyer/hallway. Completed the project in two days and beautifully!!! Highly recommend!

Madeline B.
Purcellpro Painting certainly lives up to its company name! I needed my whole interior done...walls and ceilings. Purcellpro Painting and crew were very accommodating as they were... able to squeeze my job in during a busy time of year for them! The crew was amazingly friendly as they always arrived very punctually, worked hard, and straightened up before leaving. The guys were not satisfied until I was satisfied and they took customer happiness to the extreme. Before completing the job, they did a final walk-through to ensure that they hadn't missed any spots! I would definitely use Purcellpro Painting again and would gladly recommend them!read more

doris W.
It was a pleasure to have Frank and his team on site when they painted our townhouse. These days it is rare to find people with the quality of work ethic his team presents. I... can highly recommend them and will use them again.read more

Mary M.
Did a nice restoration on my exterior wooden shutters and trim work. Clean and professional .

Jim M.
Painted two bedrooms, den, hallway and bath. Excellent highly responsive customer service. Very punctual every time. Good quality, good job of patching and prep, good clean up.... There were a few touch-ups required at the end and they sent someone quickly to address them. I would definitely use them again.read more

Tracy P.
Purcellpro Painting guys are able to give me a quote in a few hours, and get to start the job the very next day! He does a great job of following up and make sure things done... correctly! They give an honest opinion. Good communication. I will sure use them again in the future! Highly Recommended!read more

Francis W.
The guys done a beautiful job on my exterior stucco repairs and painting work. Last minute repair was needed and fulfilled.